Do you have ambitious plans you would like help with?

Please get in touch

For a general discussion about what we could do together

As a venture looking for investment

If you are interested in being part of the Zag journey
talent@wearezag.com

If you want to learn more
press@wearezag.com 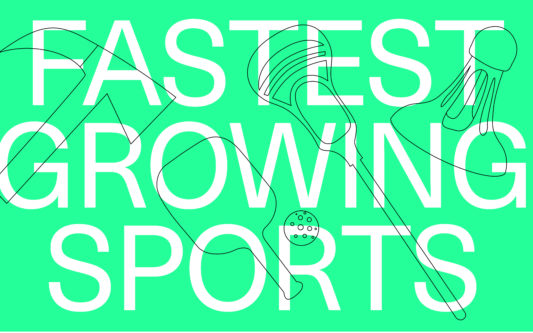 From the many contenders, we are choosing to look at four potentials as the fastest-growing sports in the world and then consider what it takes for a new sport to take hold.

Governed by a core principle called Spirit of the Game™, Ultimate (Frisbee) is proud of its heritage of being a self-officiated sport from local recreational play to elite-level, international competition. The sport was created in 1968 by students at Columbia High School in Maplewood, NJ and is now played worldwide across three primary disciplines: grass, beach, and indoor. Points are scored by passing the disc to a teammate in the opposing end zone. Rain, wind, or occasionally other adversities can make for a testing match with rapid turnovers, heightening the pressure of play.

Today, pickleball, a hybrid of tennis, badminton, and ping-pong, is the fastest-growing sport in America. Between 2014 and 2019, pickleball participation grew by more than 7%. Its founders threw together wooden paddles, a badminton net, and a perforated plastic ball. And so “pickleball” was born as a sport, presumably deriving its name from a dog named Pickle, who kept running away with the ball. What makes pickleball so popular is how universal it is; it’s not expensive to play and isn’t always a particularly taxing game physically, so it appeals to older generations as much as the younger crowds.

If you’ve been to the right kind of beach lately, you might have seen what looks like two volleyball nets stitched together in a square. Say hello to crossnet. It’s like volleyball and four-square combined, and it’s fit for kids aged 8-88. The sport is played on a revolutionary four-way volleyball net, where four players compete in a hybrid version of four-square and volleyball to score 11 points and win by 2. The sport continues to grow in popularity through amazing word-of-mouth marketing and user-generated content.

The modern sport of axe throwing involves a competitor throwing an axe at a target, attempting to hit the bullseye as closely as possible. Axe throwing has historically been an event in lumberjack competitions.

It’s when playground games and downtime entertainment start to be codified that a sport is born. Once rules are in place, clubs and competitions can start to form, and the journey goes on from there. This story is the spitting image of how axe throwing ballooned out of a night among friends (Matt Wilson’s Backyard Axe Throwing League) and into a sport with a World League active in 19 countries.

“We knew early on that we had a great opportunity to build an accessible, universal game that can be enjoyed all year round” — Matt Wilson, Commissioner at the International Axe Throwing Federation.

The World Sports Encyclopedia suggests that there are over 3,000 sports practiced worldwide. The upcoming Tokyo Olympic Games will only feature 33. So, what does it take to hit the top 0.01%? Building from the ground up.

Sports historically started to fulfill a human need. Tribes in the Americas played lacrosse as an alternative to armed conflict. The working classes played football to unwind after work. As time goes on, sports can grow out of these roots and gain popularity.

Of course, it takes more than an idea and some rules for a sport to progress from a back garden to the big time. For that, you need a groundswell of investment and infrastructure. Training facilities and coaching staff are the accelerators that facilitate more grassroots sports and drive them closer to the mainstream.

Young people also need proof that they can climb somewhere high on the totem pole. If there’s a precedent for training, succeeding, and excelling, a sport is more likely to appeal to more people. It also helps that the more people progress in their leagues, the more it’s talked about and noticed.

For all this to happen, you need interest at the grassroots level— and that’s why sports start on muddy grass pitches and in back rooms. Without a safe, fun, and healthy environment, there won’t be any investment. When children pick a sport to play, their choice is influenced by one of two key factors: inherited loyalty and playground adoption.

It’s through playground adoption that politics starts to creep into sport. The committees that decide what makes it onto the school curriculum have a massive sway in which sports succeed. It’s why an estimated 46% of UK national school competitions are won by private school teams despite state schools making up 86% of participants. They’ve got the resources—financial and physical—to train effectively and win.

For success at the grassroots level, you have to advocate for decision-makers to put your sport on the curriculum. From there, you can generate mass appeal and grow outwards with infrastructure, coaching, and community. This cycle allows new sports to grow and transcend borders.

There comes a time when a new platform is needed to propel an innovative sport onto an even wider stage. When a new pursuit reaches around 60 to 70 countries, it may hit a ceiling that only the Olympics can break. Appealing to the International Olympics Committee allows a sport to gain political support—but for that, you need to make a compelling case and take control of the narrative once more.

The hardest thing for any business or sport to do is to start. All too many firms and sports have fantastic propositions but no guiding narrative to bring them to the fore. They need to develop their story and make their case to gain investment and interest.

Every day, we speak with ambitious businesses, community leaders, and sports enthusiasts. They have a strong vision, but putting that into the right words is difficult. It’s no small feat to garner attention from the International Olympics Committee or to generate mass-market appeal for a new product, but it’s what we help our clients do every day.

Whether in sport or business, it is possible to join the elite—and it all starts in the community.

ZAG is an independent consultancy proudly born inside one of the world’s most creative agencies, BBH, and experts at finding creative ways to fuel growth.